In October 2015, a group of Turkish fishermen were out on their normal job in the Aegean Sea. Suddenly they saw a group of struggling people in life vests. This group was half of a collection of 30 who had been tipped into the water when their boat tipped over. The Turkish fishermen immediately set to work pulling the refugees out.

In very bad Turkish, the group told the fishermen that there were still others in the water who had broken away from the group. One of those the fishermen glanced around for was an 18-month-old boy. They saw a life vest so lightly floating they thought it was empty, but when they came nearer they found there was a baby inside.

Immediately, the Turkish fishermen got the water out of the baby’s lungs, and then wrapped him up tight against hypothermia. He was weak and barely moving, and unconscious. However, to the relief of the fishermen and the baby’s mother, he was still alive.

Stories like these are good examples of why choosing the best life jackets for kids is a must. If you watch the video, you will see that whoever provided the infant life jacket pretty much saved that baby’s life.

The Color of Life Jackets for Kids Should be Right

If you watch the video of the Turkish fishermen spotting the baby, you will notice the infant life jacket is an extremely bright, eye-catching red. The small bundle was so far away from the boat that if the life jacket had been white or blue, it might have been lost against the waves. After all, the fishermen were looking for others as well.

Remember, when you pick life jackets for kids, the color you choose is crucial. Ignore fashionable blue-or-white vests that fit in with the beach and the sea. Instead, pick the color that is sure to yell for your attention when you glance up to check where your baby is.

The Flotation Collar of Life Jackets for Kids Should be Right

The boat of those victims had capsized so long ago, that the wreckage and the other 15 victims could not be seen by the fishermen. All they could do was pull out everyone they could see. Since the victims had lost hold of the baby, no one could hold its head up. When the fishermen found the baby, it was already unconscious from the cold.

Life Jackets for Kids: They Do Save Lives

Nothing, nothing will ever replace watchfulness as the first line of defense for an infant near the water. However, there is no way to possibly make sure that in any accident, you and your baby get tipped into the water together. When it comes to saving your baby’s life, the best thing you could do is to keep an infant life jacket on the baby whenever he is near water.

Infant Life Jackets and Boating Laws in the US

What To Do If Your Boat Capsizes

What Age Can You Start Swimming Lessons?

How To Clean Infant Life Jackets 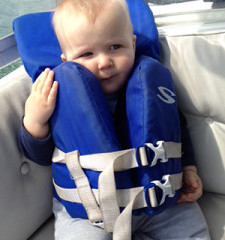 Infant Life Jackets and Boating Laws in the US

While many new parents would love taking their newborns boating along with them, to be very honest, it is not a good..Read more

Can My Infant Use Sunblock? How Does it Work?

What To Do If Your Boat Capsizes

What Age Can You Start Swimming Lessons?

How To Clean Infant Life Jackets

How to Pair Your Life Jacket to Your Water Experience

5 Water Sports that You Should Wear a Life Jacket For